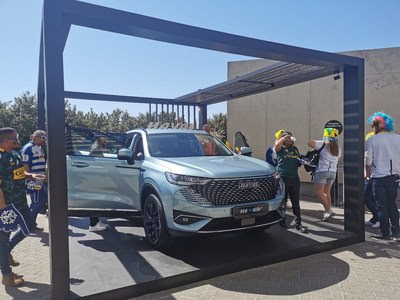 Outside the Cape Town Stadium, HAVAL H6 HEV attracted a lot of audiences attention. Some of them said that they like the exterior of the model and inquired about the configuration and the launch date.

The model is equipped with GWM L.E.M.O.N. DHT, matched with a powertrain of a 1.5T engine and dual motors.

With intelligent switching of the control system, the model can reach a balance between power performance and fuel consumption in various scenarios. When driving on urban roads at a low speed, the vehicle can be driven in the EV or series mode to achieve a quick start and reduce fuel consumption.

This new energy model currently has been launched in Australia, Thailand, and other regions.

CarExpert, a famous Australian automobile media, commented after the test drive, “The HAVAL H6 HEV is a good hybrid SUV. It shuffles smartly between petrol and electric power to deliver a blend of performance and economy, and a surprising turn of speed when you need it.”

As shown in the sales data released by the company, HAVAL H6 HEV has ranked top in Thailand’s Class C SUV market for a total of 10 months since it had been launched as of the end of July this year.

The L.E.M.O.N. DHT is independently designed and developed by GWM, which has the advantages of being highly integrated, high-intelligent and high adaptability. Through an intelligent control system, it can automatically switch the driving modes, such as EV, parallel-series connection, series connection and energy recovery, based on the current driving scenarios.

In August this year, GWM HAVAL officially announced that it has started an all-around transformation to the new energy track. The company plans to raise its sales proportion of new energy models to 80% by 2025.

HAVAL, backed by the GWM L.E.M.O.N. DHT, will produce more new energy SUVs for worldwide users, which not only can adapt to their using habits about fuel vehicles, but also relieve the anxiety of driving range and safety of the new energy vehicles.